It took me a week to regain sleeping hours and consume the entire experience of GeekCon 2007, held last weekend at the Wingate institute. GeekCon, held for the third time already, is yet another geeks convention.

Invited geeks are kept closed in a room for 2 days, with hope that something good comes out of it. This time it was sponsored by Giza VC and Carmel Ventures, as well as Oracle, Newpan and the (spiritual) support of Yossi Vardi.
I arrived with no project in mind. I thought of doing "The Da-Vinci Keyboard" project, but I then thought it was too pretentious for the scope of GeekCon. So as I arrived I met Shachar Tal, who suggested I joined their group to develop a "virtual air hockey".
We worked for about 30 hours with lots of breaks for food, beer, hanging out outside - but no sleep. We decided to develop "quick & dirty", but since we were tired and couldn't code quickly, we just had to code dirtier. Eventually, at 5am we tried our first integration. It worked seamlessly. When people were waking up to continue their projects, we were finalizing ours.
Below is the outcome: 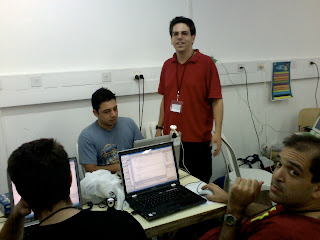