Beyond Is Where I Learn

I had a bike accident. Finally. After 3 years without a crash, a teenager crashed into me with his parents car, without even slowing down when he entered the traffic circle, in which I was already driving. Will I now throw my bike away? No chance. He's the evil one.

I'm alright, don't worry. After they peeled me off his car, all I'm suffering is pain in the ribs and immobility due to a wrecked bike. I wasn't lucky - lucky is never engaging in an accident. I was lucky for 3 years, though. So why shouldn't I drop my bike now, and move to the "safer" car?

"The evil that men do lives on and on" says Iron Maiden's song with the same title. In my humble opinion, concentrating on your cell phone while entering a traffic circle is evil. Not signalling when switching lanes is evil. Ignoring those small "insignificant" traffic rules is evil. Not behaving as if driving on the road is a serial killer is evil!

So he was evil, I was righteous. Should I now change my lifestyle, just due to his evilness? Due to the fact that most drivers are evil? Is it better to yield to evilness and live, than standing up for my righteousness and maybe get hurt? Leaving my bike now is like surrendering to terror. Leaving Israel to avoid suicide bombers. How many of you are willing to surrender for that? Think for yourself how many threats surround you. Will you surrender to all of them? Do you?

I'm a gambler, a risk taker, I love living on the edge and balancing on a ledge. I invest in the stock market, I love extreme sports, I'm an entrepreneur, and I ride a bike. But above all that, I stand for my way of life, and never surrender to society's normas, outside threats and evil drivers. 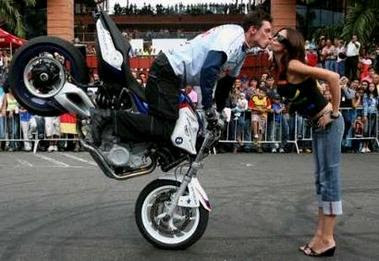 I love my beloved ones, and thank them for their concern, but giving up my way of life and having it their way, is just too much for me.

Just promise me - always drive your car as if there's a bike on your wing that you can't see. It's usually true.
Posted by Boaz Kantor at 08:52

Like I told you just a couple of days ago - not every bike accident is the biker's fault, but EVERY bike accident can be prevented by the biker alone.

That said, 3 years without an accident is pretty lucky indeed...

Boaz hi: Sorry to hear about the accident ... glad to hear that you are OK and intend to keep on biking. Keep pushing the enevelope, but watch out for the morons around. -- Shimon

Hey man, you sound pretty wound up about this.
I say: chill out.
I don't who's been trying to cramp your lifestyle, although I can throw a wild guess. It sounds like they really got down on your case, though. Still, and you probably realize this yourself, you just got them scared.
I'm not saying anything about the bike, just that you sound kind of high-strung from all of the pressure to forgo the bike.

P.S. - From a car driver's point of view: I try to be aware of all of the bikes around me, but you bikers have to realize that when you "cling" to cars you're taking a risk. It's not illegal for no reason.

Hey man, bummer about the bike...

Anyway, you sound kind of high-strung from all of the pressure to forgo the bike. Cool it down, they're only scared about you. Just convince them that you're a responsible rider, and if that doesn't work, convince them (calmly) that they won't change you.

You are Optimus Prime, Driver is Megatron. Keep on fighting the fight of justice. We WILL prevail! Excelsior!

Boaz, A wise man once said "Be smart not right", though i guess he said it in Hebrew and he probably wasn't that smart. Still, even if the teenager is the root of all evil, there surely are more like him on the road, and well, when two vehicles collide the biker usually pays a higher price. So I'm not saying you should give up on your freedom but don't justify it on him being the culprit and not the victim.

Bro, I love your spirit and your way of living, and the last thing I want you to do is to force yourself to behave against your way of being.
No. Correction. The last thing I want is that you'll get hurt or even worse. So keep on enjoying your wild horse, but take extra care, for there are some great kids who are waiting for you to give them birth and to rase them to be themselves ;-)

Thanks to author for this article. Very interesting. Write more!